so dry and so chic.

This modern synthetic garment nonetheless comes from far away.

Well before the yellow vests required in cars, it was designed as a garment visible from afar. Just in case... Sun yellow for rainy days, a navy jacket that became a garment for amateur yachtsmen, the Breton raincoat is now essential on boats and adds local color for vacationers under cloudy skies.
But this modern synthetic garment nonetheless comes from far away. From the time when sailors, tired of their jackets weighing them down in the rain, began to look for ways to get water to slide over the fabric instead of seeping in. The solution: canvas soaked in linseed oil that was applied by waxing the jacket. Hence the raincoat’s other name: "oilskin", which was also given to the fabric of the same name, to make it waterproof and put it on tables of all kinds where wine and other liquids can slide off, rather than soaking into the fabric. 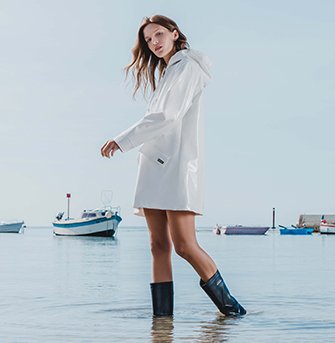 Like many other natural products, linseed oil would give way to a multi-purpose synthetic material: vinyl. That is what was used for 33 or 45 rpm records, but it is also the basis for the modern raincoat. It appeared in the early 1960s and saw many variations, combining light weight and waterproofing. With zip closures, then velcro, to make the garment much easier to put on than the fisherman’s smocks of the olden days, which were put on over the head. 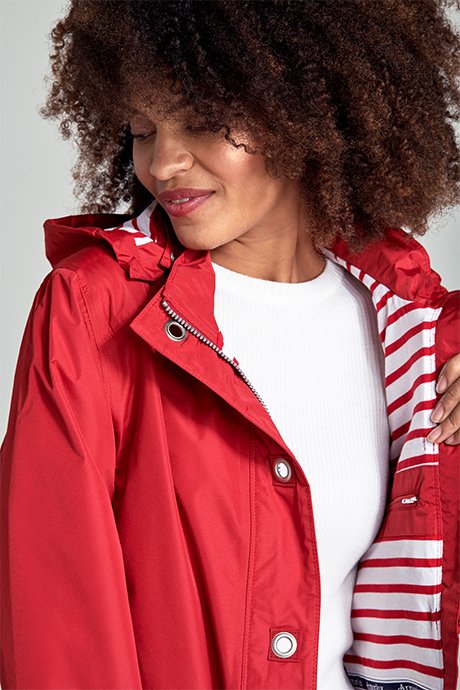 Armor Lux has opened its raincoats to new trends. While children can still wear the classic yellow raincoat, but with a striped lining, the men’s and women’s versions have embraced new clothing trends: the jacket is white, red, or navy blue for women and navy blue for men. Different, modern colors for a garment that retains its authentic look.

But like the sailor sweater, this jacket did not stay exclusive to the maritime world for long. With its lacquered layer, it strongly reflects light while providing very modern shapes in new colors, where yellow is making way for black and white.

Breton raincoat for men Breton raincoat for women
We use cookies to customize and improve the content shown to you, making sure you get the best online shopping experience. If you want to learn more about cookies, visit our Cookie Policy page.
Continuer sans accepter